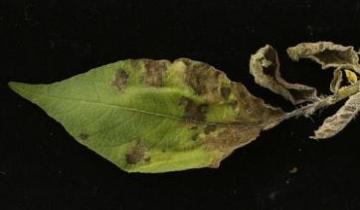 Late blight, caused by the oomycete Phytophthora infestans, is the most damaging potato disease globally.

We are investigating the molecular interactions between P. infestans and potato, in particular the roles of pathogen secreted effector proteins that promote disease development, and may also be recognised by specific resistance proteins.

Specifically, we examine which effector proteins are activated during infection, where they act during infection of potato, which potato proteins they specifically target, and the role of the target proteins in disease development or defence.

Understanding the mechanisms used by P. infestans to cause disease, in parallel with the processes by which plants resist infection, will drive long-term disease management strategies.

What’s Next in Our Fight Against Potato Blight?